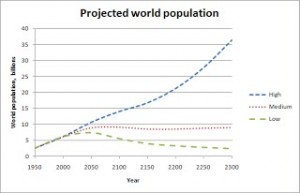 becoming scarce and problems with current system being evident (Asif & Muneer, 2007; Chisti, 2007; Energimyndigheten, 2010; Ekendahl, 2010; Rupprecht, 2009). Up to 60% of our energy is covered by fossil fuels (Rupprecht, 2009). Therefore we are facing depletion of fuel sources, rising oil prices, global warming and bad energy security while population growth and modernization increases the demand (Asif & Muneer, 2007).

United Nations predicts three different scenarios in population increase: low, medium and high (United Nations, 2004). A decade ago, year 2000, the use of energy per capita was 1657 kg of oil equivalent worldwide while the developed counties used 4622 (World Resources Institute, 2000). If it is reasonable to believe that the per capita usage of energy by 2100 has risen to that of developed countries 2000, even a decrease in population as the UNs low scenario prediction, will increase energy consumption by 2.5 times. Considering the medium and high scenario, demand will rise to 4 or 6 times that of today. How long will our oil resources last?

Climate change and ocean acidification are at the same time changing the ecosystem we live in (Blackford, 2010). Costs and human suffering are already increasing with more storms and disasters as part of the global warming (Asif & Muneer, 2007). Other disasters take place because of the unevenness of oil resources, like the war in Iraq and Afghanistan. Most resources are indeed located to the Middle East (Asif & Muneer, 2007) and I think this will be more evident as sources in other countries, such as USA’s, run out.

Clean energy could on the other hand create new, green jobs in regions that dare to invest. There is probably not only one given solution; I think it is necessary to search for many different ones. Political decision in Sweden has already made clear that renewable energy is the future (Energimyndigheten, 2010).