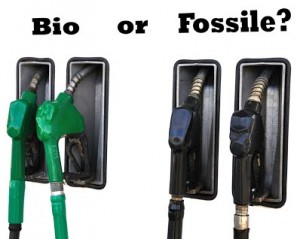 Ethanol can replace or be mixed into current fuels

Ethanol is produced by enzymatic cleavage of carbohydrate chains, like starch, into shorter chains and then fermented and finally distilled. It is hard to convert more complex compounds such as cellulose to sugars (Hedegård & Svensson, 2006). Brazil has fueled car engines with ethanol since the 1980’s, traditionally made from corn and sugar canes. The ethanol is considered clean and can be mixed into regular fuel systems. Drawbacks include direct competition with feedstock for food, low conversion values from sun to biomass (<1%) and that maximum capacity never can cover current demand. This gives a high price on the feedstock, but also enzymes needed to shorten starch into mono- or disaccharides push up production costs (Rupprecht, 2009). Ethanol from algae would eliminate the competition with feedstock, but research needs to be done on suitable enzymes, not the least to get the enzymes working in high salinity (Albers, 2010). Another option is to convert the starch to methanol.

Ethanol can be directly produced by hybrid algae. In this case the cells leak out the ethanol, which evaporates and condenses on the walls of the bioreactor and is collected. In this way the algae production can be continuous and energy demanding steps such as harvesting, drying and extraction can be avoided (Algenol, n.d.).

All vegetable cells contain lipids. Biodiesel is the transesterfication outcome from

Production of biodiesel from algae has been completed  and the oil content can be more than 50% of biomass (Rupprecht, 2009). Diatoms and green algae seem to be most promising considering yield (Demirbas & Demirbas, 2011). Even levels of 60% have been achieved, but the high levels come under nitrogen starvation. Nitrogen starvation gives high lipid content, but stops cell division and thus limits total biomass values, making large scale production improbable (Sheehan et al., 1998). The high content of unsaturated lipids in the biodiesel derived from algae might create a stability problem while it will help keeping the diesel liquid in cold weather (Demirbas & Demirbas, 2011). The calculated price for algae biodiesel is $20 per barrel, which is very low considering a current oil price well over $100. The low price is possible since there is a theoretical oil yield of algae, well over 15 times that of palm oil, however, none of the projected oil yields have been achieved (Demirbas & Demirbas, 2011). Other calculations are not as optimistic and give a price of $61-127 (Sheehan et al., 1998). Biodiesel can also be produced by macroalgae (Hossain et al., 2008). 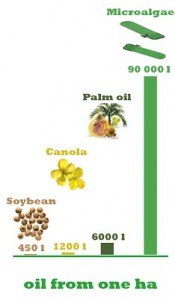 Biogas is the end product when anaerobic bacteria have degraded organic matter in several steps. It consists largely of methane and carbon dioxide (CO2). Algae are particularly good to use since they lack lignin and have low levels of cellulose, while the remaining biomass can be used as fertilizer. In laboratory Macrocystis pyrifera and Durvillaea antarctica has been successfully converted (Vergara-Fernándeza et al., 2008). The main advantage of biogas is that production is independent of the biomass source (Sheehan et al., 1998).

Humans have during history migrated from energy sources with high carbon : hydrogen content to low. From wood, to coal, to petrol. The next step would be to use pure hydrogen gas (H2) (Asif & Muneer, 2007). H2 is an extremely clean fuel, even if it has drawbacks in form of instability and storage. Some microalgae can produce small amounts of hydrogen under anaerobic conditions. To make the process viable, genetic modifications are probably needed to increase quantity and get the process working aerobically. Also technology for extracting, and not the least distributing and utilizing the hydrogen gas, are lacking (Rupprecht, 2009).