Today clean and renewable energy come from wind, sun and water, but these yields electricity, which is hard to use for transportation (Rupprecht, 2009). Most infrastructure and most vehicles are built for liquid fuel, think about gas stations! Liquid biofuels can be produced from biomass of photosynthesizing plants capturing the radiant solar energy, well covering our current energy consumption (Figure 4) (Asif & Muneer, 2007). One possibility is to derive the energy needed from algae. Research on algae for biofuel was already going on in the 1970-80’s, but with increasing fuel prices and a better toolbox the research today have better chances of success (Pipe, 2010). It is truly a hot topic; both the Finnish (VTT) and Swedish (SP) technical research institutes are currently working with algae and biofuel as a research platform (Ekendahl, 2010; Wiebe, 2010). I think that awareness of pricing for ecosystem services and included external costs to current energy system will add to the importance.

Algae are efficient sunlight harvesters, have a high production and do not need to occupy farm land or compete with fresh water supply as other biofuels do, one example is ethanol from Bra-zilian sugar canes (Chisti, 2007; Pipe, 2010; Rupprecht, 2009). One reason for this efficiency is that less energy is spent on building roots or supportive structures since the algae is suspended in water (Rupprecht, 2009). Small size or constant water exchange  increases the nutirent uptake (Graham et al., 2008).

The algae store the energy in the form of lipids, starch or proteins (Rupprecht, 2009; Pipe, 2010). The lipids could be made into biodiesel (Chisti, 2007; Pipe, 2010) whereas starch can be fermented to alcohol (Albers, 2010). Both options seem reasonable and are interesting to study. Any biomass can be anaerobic digested to bio gas (Sheehan et al., 1998). Yet another option is to genetically modify algae to leak biofuels while growing, for example making cyanobacteria leak hydrogen gas (Lindblad, 2010;  Gjermansen, 2010). 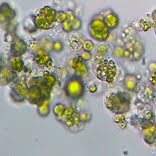