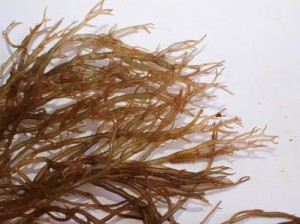 There is a potential in using macroalgae as both biofuel and CO2 bioremediation since they have a high productivity (equal or higher than terrestrial plants). Furthermore, they do not compete with farmland and theoretical calculations show that it is economically feasible. However technology for large scale farming as well as converting the biomass to energy is immature (Kunshan & McKinley, 1994). Also there is in my opinion, quite some sustainability issues in order to make sure that large scale farming and harvesting do not disturb natural systems.

Gigant brown kelp, such as genera Macrocystis and Nereocystis can grow half a meter daily  and become 30-80 m (Sheehan et al. 1998; Wikipedia, 2011). Macroalgae produces small amounts of lipids, but store starch for energy reserves (Sheehan et al. 1998). Therefore I think the best option is to ferment the biomass to ethanol or use it for biogas production.

Before biofuel production it migth be posible to make futher use of the macroalgae. The brown seaweeds, such as the kelps, have compunds, known as alginates, that helps them cope with mechanical stress from the ocean. The alginates can make up 20 to 40% of dry weigth (DW) of the seaweeds and can be extracted and used as stabiliser, for example in paint, ice-cream and mayonaise. In red algae correspondig compounds are carragean or agar (Graham et al., 2008). The stabilizing coumpounds are called phycocolloids.

The total value of seaweeds used today is USD 5.5-6 billion, the largest part by human food (USD 5 billion) and the rest for phycocolloids. The biomass used comes from both natural habitats and active farming in 35 countries (McHugh, 2003).