The different algal strains will give different yield (Rupprecht, 2009) but it is not just a question of choosing the strain with the highest oil content. For example, the unicellular green algae, Scenedesmus dimorphus has high oil yield, but is heavy and sediments if not kept afloat. On the other hand, another microalga, Dunaliella tertiolecta, has rather high oil content and is fast growing. It is a better candidate since it is motile, does not form chains, or sediment (Demirbas & Demirbas, 2011). The most promising algae are found within green algae or diatoms. In Hawaii there is a collection of 300 algae species available, suitable for screening left over from the Aquatic Species Program (Sheehan et al., 1998). Microalgae are not restricted to a few harvesting seasons and increase in yield can be made by genetic engineering and coupling to CO2 exhausts (Rupprecht, 2009). Since coal might be one of the most important sources for fossil fuel, a coupling between power plants and algae farms could be a solution since 90 % of the CO2 can be used by the algae (Sheehan et al., 1998). 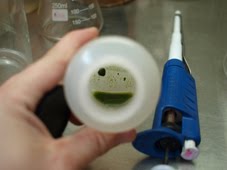 To get viable algae the screening should be done in places where conditions for cultivation systems are met, i.e. high salinity, intense light as well as wide temperature swings. Six species/genera that during the Aquatic Species Program in USA showed potential were Chaetoceros muelleri, Navicula, Cyclotella, Amphora and Monoraphidium minutum with growth doublings of 1.63 to 2.87 per day. When sampling the algae it is important to remember that genetic diversity is large also within the species, if few samples are taken they might not be representative for the population. Warm water species have been most commonly screened, more work is needed on cold water species; however, these contain a higher level of polyunsaturated lipids, which tend to polymerize when burned and thereby create problems for the engines (Sheehan et al., 1998).