A heterogeneous group with potential

Algae are a very heterogeneous group of eukaryotes, ranging from microscopic 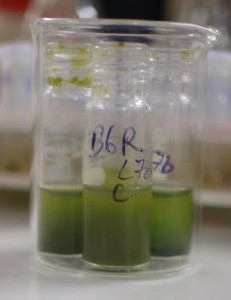 unicellulars to macroscopic giants. Some are autotrophic, other more animal like and heterotrophic. Curiously even the prokaryotic cyanobacteria are counted to the algae (Graham et al., 2008). Both production of microalgae- (Albers, 2010; Ekendahl, 2010; Pipe, 2010) and macroalgae biofuel has potential to compete with traditional fuels in production efficiency (Kunshan & McKinley, 1994). Industry says that research is needed to get the technology working, something that could take 5-10 years (Ekendahl, 2010; Børresen, 2010; Gullfot, 2010). To the right: Algae biomass.

Other products from algae

There are other possible products besides biofuels; pigments, feedstock, nutrition (omega 3 and antioxidants), pharmaceuticals and as pollution control (Pipe, 2010). To make algae production commercial, there is a high probability that more than biofuel has to be produced from the same batch. Already today several products are sold at the market, however, not yet biofuels (Gullfot, 2010). The great differences in rules and regulations between fuel and food industry cannot be neglected. In Germany a mix-up of biodiesel oils for lubrication and food led 2011 to a massive dioxin poisoning of hens in egg production when a supplier mixed oils for industry and food (sr.se, 2011).